When I stumbled across prints of Rosalind Solomon‘s a few months ago, I felt like I was looking at some kind of missing link. Her gallerist leafed through the big prints and I stood there, confused. “Whose pictures are these?”

If Solomon’s work is a link, it may between the past (the irony of the Arbusian square) and a future that’s waiting to begin. That’s not the most precise language, but as a photographer, I feel like Solomon is pointing “out there” to that place where great photos come from, whether it’s on a street close to home or on a mountain trail on the other side of the world. 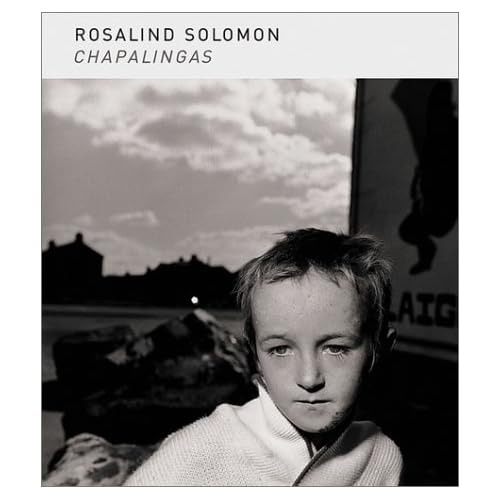 Frankly, I hadn’t seen anything like Chapalingas before. Over four hundred pages of global portraits, landscapes, moments, interiors, exteriors. In an age in which photo books (and art projects in general) can asphyxiate from the limits of their own specificity, it’s inspiring to find a photographer who doesn’t primly fit into a box with a neat label. Which makes writing about Solomon’s work a challenge.

She has a new book “Polish Shadow” on the way (from Steidl), and I’m happy she was able to take time from her project to answer a few questions here. 2point8 in bold.

Q: Rosalind, your work is wide and comprehensive in that it spans not just decades and countries, but it encircles the girth of human experience, from birth to death, with quite a bit inbetween. Did you always envision a book as big as Chapalingas, or is it a compilation of smaller projects that grew into something larger?

When I started out, my goal was to create books of my projects. Tennessee Williams agent, Audrey Wood, loved my battered dolls and tried to get them published. She gave up after several publishers found them too disturbing. (They reminded Alice Walker of the murdered civil rights workers!) When my India work was scheduled for a show at Eastman House and the Smithsonian Institution, the curator hoped to publish a catalogue placing the pictures in the context of expeditionary photography. There was no catalogue, because Eastman House could not raise money for the project, so again there was no publication. Even when I had my solo exhibit at MOMA, “Rosalind Solomon, Ritual” there was inadequate lead time for a publication.

Chapalingas gave me a book debut, 35 years after I had begun making photographs. When I began choosing images for the book, I did not forsee how many images would make the final edit. My concept developed over two years as I worked to sequence the pictures. I wanted to reveal the scope of my work, my inner process and repeated themes. I thought that could be done best by showing relationships between images that transcend time and place. The chapter divisions became a device for sectioning and structuring both texts and images. I edited pieces from my journals and wrote new texts as I edited from an original selection of 1500 pictures. In the end, I chose 200 images for the book.

The Photographische Sammlung and Steidl published the book in conjunction with a major exhibit of my pictures. For several months I worked in isolation at the artists colonies, MacDowell and Yaddo, and it was during those residencies that a framework for Chapalingas took shape.

Q: What sustains your desire to combine travel and photography? Your work shows a dedication not just to people, or to documenting, but specifically to documenting people where they live, and showing the details of their surroundings. How has travel furthered your photography?

Margaret Mead was one of my early heroes. I dreamed of knowing and understanding other cultures. When I began taking pictures, I was 38. I lived in Chattanooga, Tennessee, the wife of a businessman and the mother of two children. My interest in international relations led me to establish the international exchange programs of The Experiment in International Living in the South. The organization arranged for me to live with a family in Japan for a few weeks, to qualify me to orient families who would be hosting Japanese students. During my stay with a family outside of Tokyo, I began taking pictures with an instamatic camera. Within a year I had a Nikkormat, and in 1972 I began studies with Lisette Model during my visits to New York. In 1975, my husband and I traveled to Sicily where I took my first medium format pictures abroad. In 1978, I began to travel alone. I concentrated fully on my photography in a way that was not possible at home Rugged travel wedded me to my work. Alone in foreign cultures,stripped of other roles, I stayed in touch with my gut. For me, part of the lure of photographing while traveling is getting closer to strangers and their lives. I began doing that in Tennesseee and Alabama, and continued in Guatemala, Peru, Nepal, South Africa, and most recently, Poland.

Q: Photography’s entered an age of speed, ubiquity and automatism thanks to digital cameras. In looking at your work, the consistency of technique is startling. Can you talk a bit about how you settled on the camera you use (30 years ago) and why you’ve stuck with 6×6, black and white?

The medium format camera satisfies me. It can be transported easily and is mechanically sound. My challenge is not format or color, but deepening my perception and range of ideas. I am interested in making expressive pictures. Black and white pictures work for me as poetry and metaphor in a way that color does not. I have tried color and I have tried digital. Neither gives me the sense of depth that I feel with black and white. Good images come slowly. 6 X 6 film is my “page”.

Q: You studied with Lisette Model. Was she a teacher of technical specifics or generalized inspiration? Did she point you in the right direction and say “go”?

I love performance (theater, opera, and film) and I think that they influence my vision. I am not conscious of drawing inspiration from a particular source when I work on the streets, though in Diane Arbus’ work, I saw the latitude that strobe gave with a medium format camera, and I chose that way of working.

In 1972, I found a place to go regularly and take pictures. and I have never found its equal. It is a market in Scottsboro, Alabama, situated on the courthouse square. I went month after month and walked around the square for a few hours. At first I photographed everything and anything, but gradually focused on dolls and people. Making close-ups of doll heads taught me how to get closer to people. In making some of my group interior shots, I function in the same way as I might on the street during a festival or fair. I position myself to frame and shoot, as though I am invisible.

Lisette’s critiques dealt with technique such as lighting, positioning to take a variety of pictures and print tonalities. She never questioned my subject matter or asked the meaning of my pictures. She taught me to go for my attractions and please only myself. Lisette had strong convictions about everything. She gave blunt personal advice. The essence of what she said is: You are an artist. You must be selfish and not give too much time to others. Marriage is a problem for photographers because they need to be free. Your children are almost grown. Your civic work is done. Your husband needs to spend some time alone. You must have the freedom to create your pictures. I met Caroline in the French Quarter and heard that she had lived in her car for a while. I saw her in the car and asked to take some pictures.

Text heading of ‘Wheels’ section from Chapalingas:
“I wanted to open the door and leave the rusted jalopy
He mumbled, ‘I might as well be a yak.’We could not go on.” In this instance there is a story to tell.
The family had moved to South Africa from Rhodesia where the boy’s father fought against the revolution. They said that the housekeeper’s daughter was their adopted daughter. He had a corporate position working for better race relations in South Africa. The children were playing. The boy put the bucket over his head and I took a picture. The man was carrying life on his back, its burdens and its music. He appeared as an icon in the landscape.

Text heading of ‘Ropes’ section from Chapalingas:
“Ramon, strap my corpse to your white mule. Take my body up the Chavin trail.
Bury me in the Pojoc cemetery. Dress me in my photo vest and canvas hat.
Scratch on a stone to mark my grave, ‘She rode to the heights led by a stranger.‘